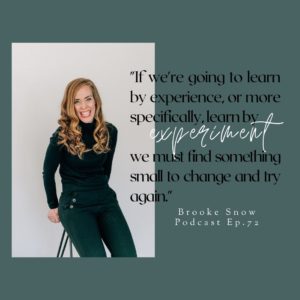 One of the opening stories in the Book of Mormon illustrates this very dilemma head on. It’s 600 B.C. and Nephi and his family have been commanded by God to leave Jerusalem and go into the wilderness.Nephi’s father Lehi is the prophet, and is receiving guidance from God regarding every next step of their journey.

When Lehi tells Nephi and his brothers that God wants them to go back to Jerusalem and get the brass plates from a man named Laban, they’re not exactly thrilled about the mission.  These plates contain the scriptures and their family genealogy and are important for Preserving and teaching their posterity the ways of God.

As such, they promise Lehi they’ll try.
And try they do.
Three times.

The first time they visit Laban personally and outright ask for him to give them the brass plates.
He calls upon his guards to kill them.

They escape the guards and are naturally feeling totally defeated. Their plan didn’t work.
In a moment of inspiration, Nephi remembers that the home they left behind in Jerusalem is filled with many fine treasures.  He suggests they try again, and this time they gather their precious belongings in an attempt to buy the plates from Laban.

Laban is certainly covetous of their treasures.  But not to be taken so easily, he once again calls upon his guards to kill them and keeps the treasures in their frantic escape.

This plan fails as well.

After having their lives threatened twice now, and losing all their fine and precious things, the brothers are understandably upset.  They’ve given up with a vengeance.

But our hero Nephi, is not to be deterred.  He is determined to fulfil his father’s command to get the plates.  He’s out of ideas at this point, but trusts that God will help Him and returns to Laban’s house a third time by himself.  And as the story famously goes, he discovers Laban drunk and lying on the ground, and is commanded by the Spirit in each next step to eventually get the plates.

Now, Nephi and his brothers may have gone into this whole mission thinking that one grand attempt would be all it took. Just like we can fantasize into thinking there’s a perfect master plan that will make all our wildest dreams come true and bring the reward we seek in one dramatic moment.

Additionally, Nephi’s brothers saw each of Laban’s refusals as a failure. The experiment failed.

Nephi was a great experimenter. He noted that it didn’t work to just ask Laban. He saw one small change they could make, and tried again. Let’s buy the plates!

When that didn’t work, he still tried again, this time without a plan of his own, but eyes to see and ears to hear so the secrets of the universe that would come to him.  God delivered Laban and the plates into his hands.

We change one small thing, and try it. We experiment. Gather data. See what works and what doesn’t and do it again. You don’t have to be married to the new way forever. It’s just an experiment.

What are His commands that will help you improve things more? What does He see in the data that you don’t?

If you are following his commands, He will provide a way. But it doesn’t mean that the first way will be the grand master plan. I don’t think God purposefully withholds grand master plans from us to watch us suffer and fail. Rather, I think there’s little tiny treasures we’re supposed to gain in the process of experimenting that we wouldn’t notice in any other way.

We’re on a scavenger hunt.  He doesn’t just want to give us the big treasure of Eternal Life, but He wants us to discover all the small tiny treasures on the way. Can you develop Christlike attributes and virtues that only come through incremental growth? Can you develop patience? Love? Trust? Courage? Forgiveness? Can you develop your ability to Hear Him?

Don’t wait for the grand master plan. Just change one small thing and see how it works!