Since I suddenly have tons of time on my hands (ha ha ha) I have been doing a lot of reading. (That part is actually true. When you are nursing for upteen hours a day you can read more than a few books.) I have been reading The 5000 year leap and Jace has been reading a book about George Washington. (I would write the specific title, but it appears he took it with him to work…)

Both books are about the founding fathers and the time period of the Revolution and the signing of the Constitution. Because of the similarities Jace and I have had some good discussions….which trickle into my 2:00 a.m. musings. (Still working on convincing the baby not to be as dedicated as a Swiss watch).

Providence. Have you ever heard the word? The founders used it a lot because even though there was a variety of different religious beliefs amongst the founders, they shared very common, very important threads of truth. One such value was that they believed in providence, or the idea that  God foresees and cares about what happens on earth, that he guides individuals, and that individuals have a purpose, or a part in his plan.

Do you believe that you have a part in Gods plan?

Because the founders believed it,  otherwise ordinary men not only changed history, they established a government unlike any other government in its availability of freedoms while still protecting natural rights.

But, I don’t mean (this time) to have a political discussion. I am still stuck on this idea of providence because I must admit that late at night after an exhausting day in which I accomplished nothing but keeping two cute little kids feed, dressed (most of the time) and safe, I sometimes wonder about my other dreams.

You see, I have these dreams that tap tap tap from the inside out, and even though I am doing the most important thing (being a mom) right now, I also have this innate sense that I have other things that I could be doing simultaneously.

But because I am tired I have these sleepy conversations/prayers with God. “Ummmmm, if you want me to do that you are probably going to have to pick me up and drag me there because I am soooooo tired I just put this poor babies diaper on inside-out…. and have you seen the wreckage that is my house?”

Then I have silent debates with myself about the balance of “Don’t run faster than you are able” and “Carpe Diem!”

And I am left wondering…

Do great things happen because God wills them so–or does our own self motivation dictate our future?

Do good things happen to people because they are “blessed” and are there a limited amount of such “blessings” or is there enough “good things” for everyone who is willing to put forth the effort to take it?

When everything falls into place–is this Gods hand?

When everything is difficult–could this also be Gods hand?

Is a desire to do something “great” your own personal desires or is it an ache planted inside you to help get you going?

My answer came in the oddest way.

Brooke sent me my wedding pictures that had been digitally lost to me. (She had a copy).

It was time for me to throw the bouquet. I  stood on the porch while all the available women congregated behind me. I licked my finger and tested the wind. The a band member started tickling his cymbals quietly, I held up my fingers over my head in a silent countdown. “One, two, three….”

Before I released the bouquet Brooke was standing on the farthest edge of the crowd. I think she thought I was just going to toss it to her because she knew, that I knew, that she was there.

Uno problemo. I don’t have very good bouquet throwing aim–and I don’t handle being the center of attention well.

So the bouquet became airborne and as soon as it was released Brooke realized that her fabled future was not coming directly at her instead the fauna was floating over the head of my sister-in-law Rebe Kay who was clearly not old enough to be the next damsel to wed.

Somehow, Brooke dove–or did she fly? She sprinted past outreaching hands and with her perfectly long fingers (you need long fingers for piano playing and bouquet catching) she whisked the bouquet out of the air. And then, she did the biggest happy dance anyone has ever seen that involved beckoning her future husband onto the dance floor and whipping him around in a crazy reverse paso doble. 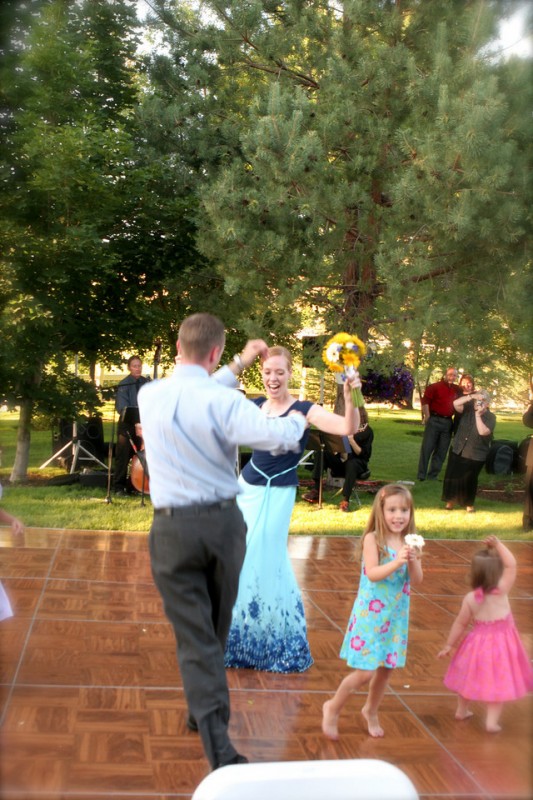 One minute she was here

The next minute she was there.

And the reception crowd went crazy. You could hear my Grandpa's laugh the loudest.

It pretty much stole my show. (I would hold a grudge, but its just a sister thing we do to each other).

So there you go.

Like a flying bouquet that you are supposed to get–even if it isn’t thrown directly at you.

(And then make sure you do a happy dance!) 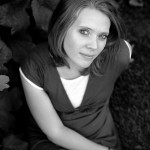 Lindsey Maughan is a mango enthusiast with a composite degree in modern and ballroom dance from BYU. She believes that when you read books you should take notes in the margins, that sandwiches taste better when cut on the diagonal, and that most mundane tasks can be improved upon with the right background music.