Magic Monday: Behind the Scenes

Despite the comments that have filtered through the grapevine to me, I’m proud to say that my “A Change in the Wind” picture is nearly straight out of the camera.  No, it is not photoshopped to look that way, and no I did not take a shot of the Julie Andrews poster as I overheard an old man say to Ben at the Summerfest display!

Thought some people might enjoy a little look behind the scenes that created the shot!

First, let me introduce you to my fabulous friend, Teresa. 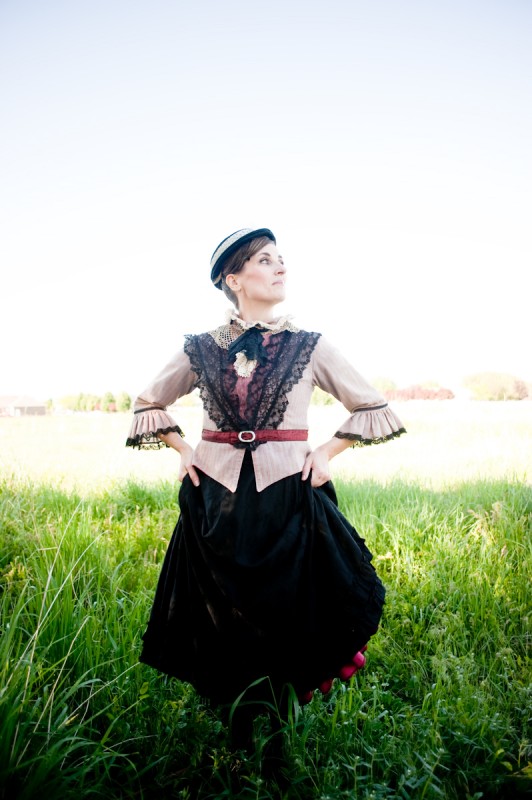 I met Teresa about 15 years ago back in my theater days.  She was playing the role of the Wicked Witch of the West in The Wizard of Oz.  I had a starring role as an Ozian and Winkey soldier.  (I had one line for the whole show… “Dorothy?  Who’s Dorothy?!?!” But my how I said it well! ) 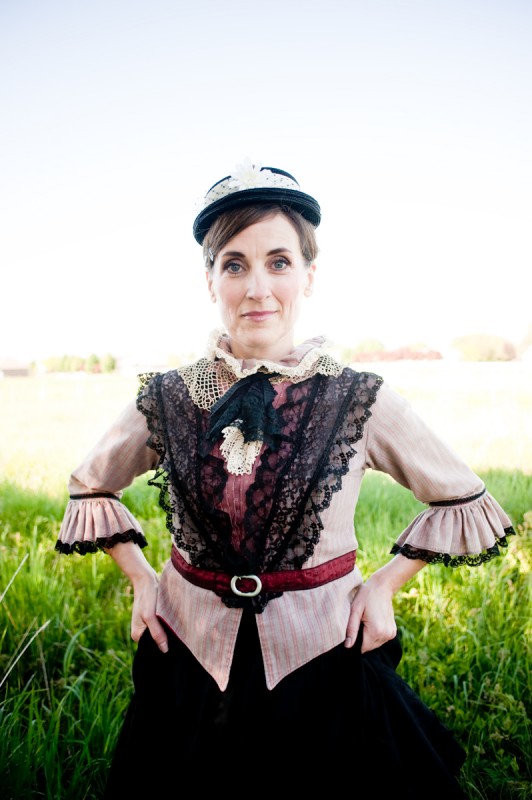 Teresa is absolutely hilarious.  So animated and fun to be around, and this shoot was definitely full of some laughs.  A lot of them! 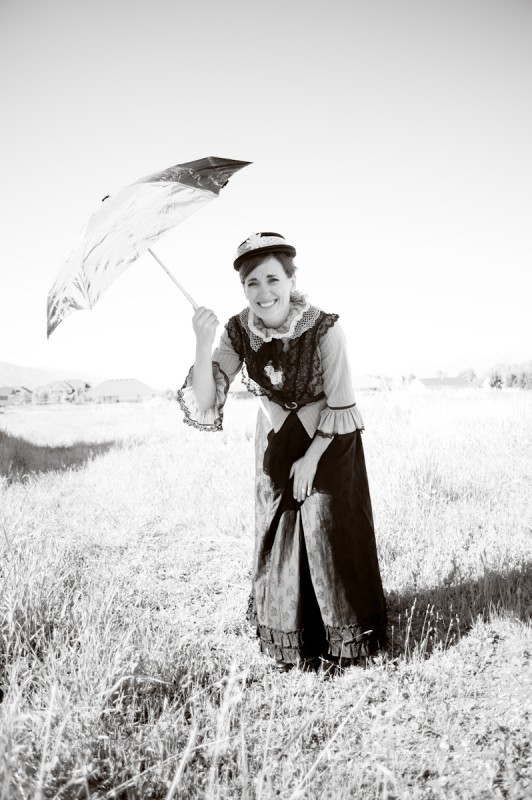 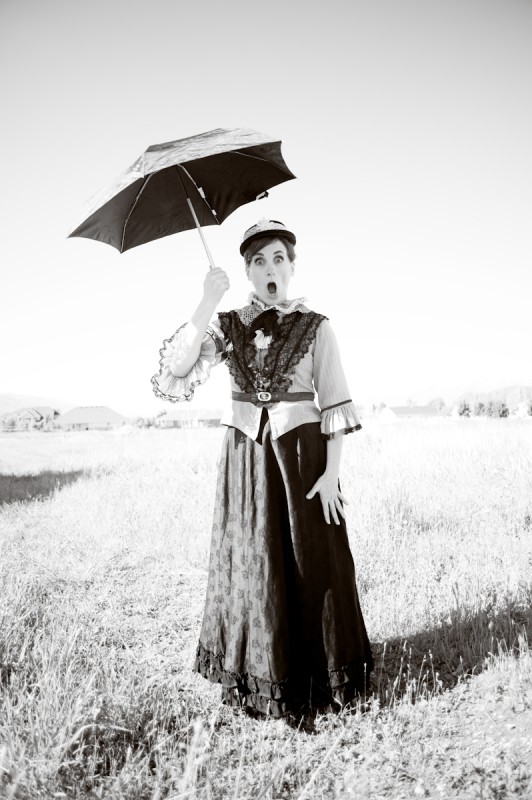 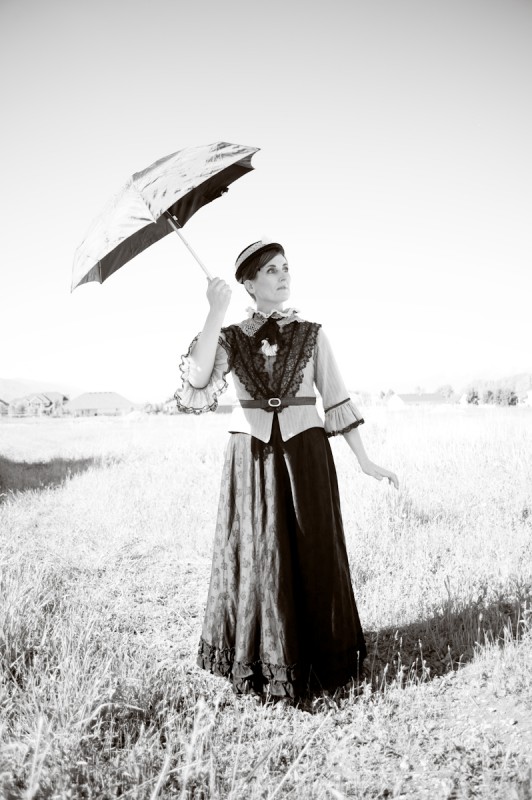 Teresa is a fantastic actress and has a costume collection to rival any drama department!  When the idea for this shoot popped into my head, I knew immediately who I would use.  Of all the random things to ask someone on facebook, I said, “Hey!  Want to dress up like Mary Poppin’s, jump on a trampoline and let me take your picture?” She responded in minutes with an emphatic “YES!!” 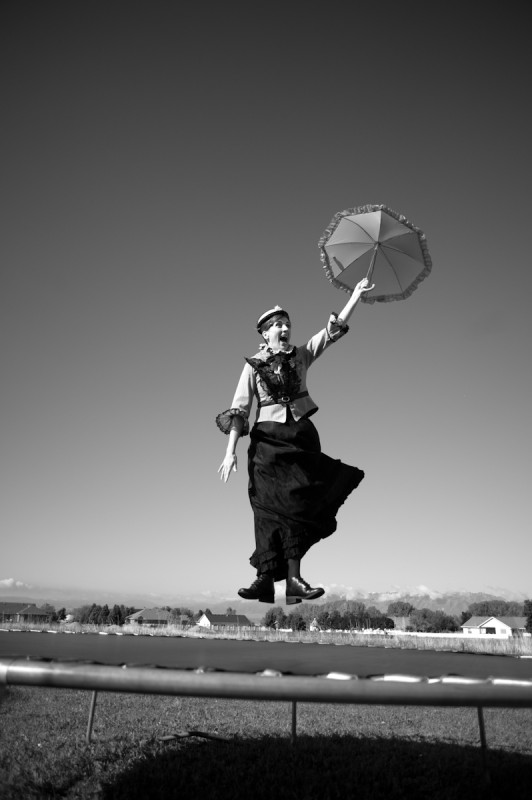 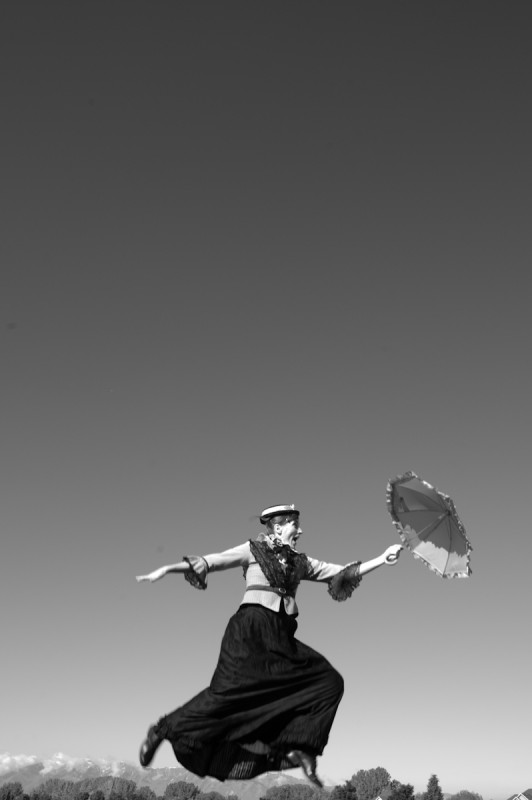 getting used to the trampoline :)

So yes, the secret’s out.  We helped Mary Poppin’s get some air via her fantastic neighbors trampoline!  I settled on this trampoline because of the location.  I could shoot west and not have any distractions of houses close by. 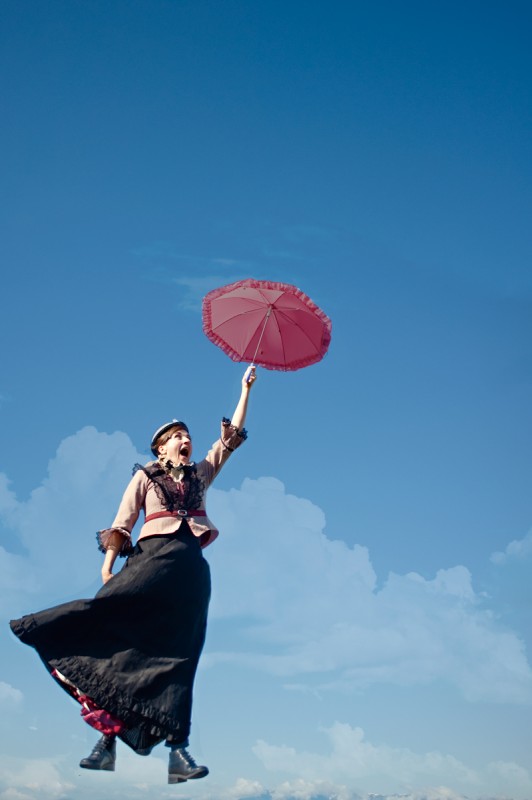 Because of contest restrictions, we had to shoot on Monday, which happened to be TOTALLY SUNNY.  And since we shot in the morning I had strong direct light shining right in her face causing shadows and contrast issues.  Sun in the east, trying to shoot west for the cleanest background… we’ve definitely got some problems. 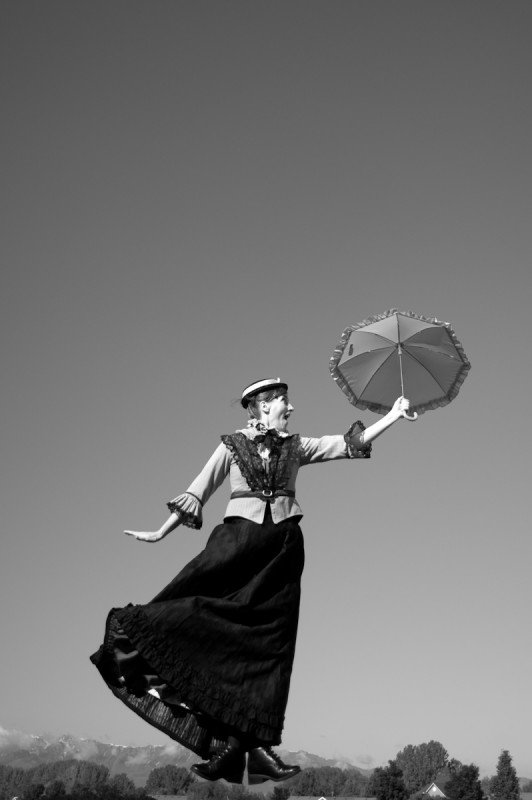 Solutions?  #1.  I decided to have her look “up” instead of at the camera.  This filled in the shadow areas, and also helped bring attention to the umbrella which is supposed to be carrying her away.

Solution #2.  We decided to use the big black umbrella as a diffuser.  Having her hold the umbrella in her right hand towards the sun, suddenly cleared up our contrast and shadow problems on her face, and… since the umbrella shade was black we didn’t have any color casting issues to deal with and it helped the umbrella to pop out against the light colored sky. 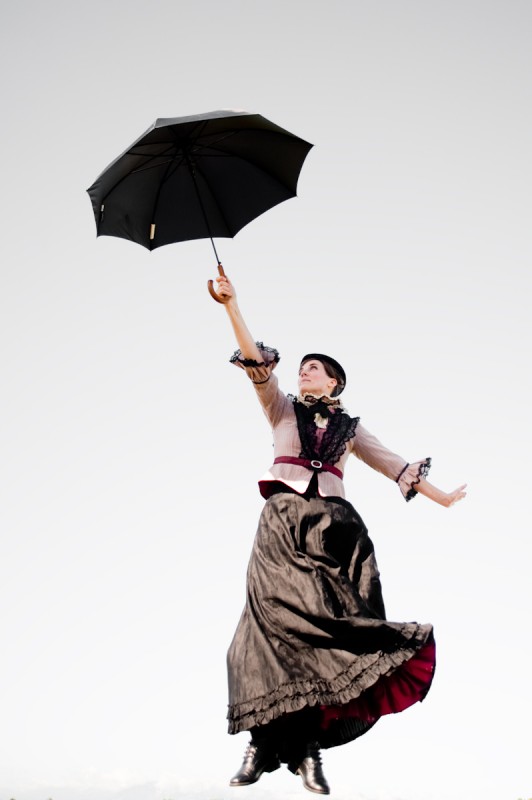 To make these shots really work, its all about the angle you shoot.  I was shooting really low (practically sitting on the ground) so that I could place her in the sky with my perspective.

And the absolute greatest trick that I didn’t figure out until the very very very end?

I got right next to the bar on the trampoline, placing part of it in the bottom of the image and shooting up at Teresa.  This in effect totally blurred out the bar since it was so close to the camera, and because I was shooting at f2.8 and focusing on my subject.  What this ended up doing, was making the blurred bar of the trampoline look like clouds and totally got rid of our horizon line of trees and houses. 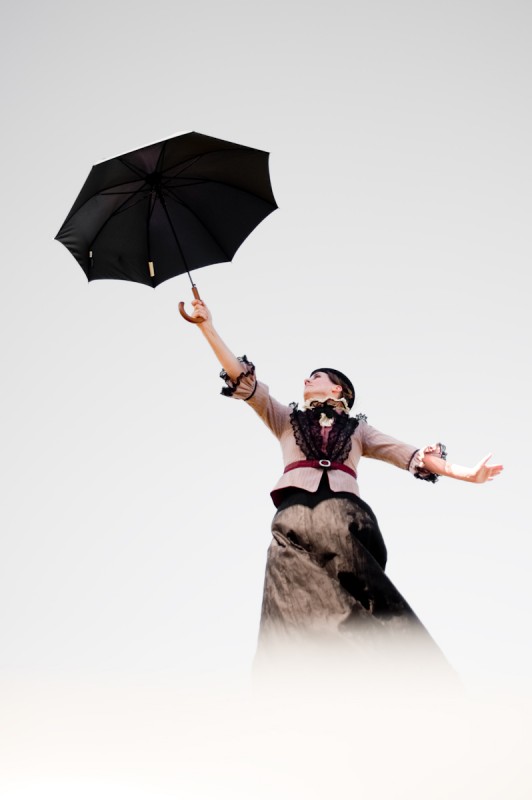 the blurry bottom of picture a result of the trampoline bar depth of field...

Here’s the winning image straight out of the camera.  The only thing I tweaked later on was the small sun spots on the bottom of her bodice that the umbrella wasn’t blocking (the only edit I did in photoshop), slight color shift,  very small crop, and I increased the exposure on the trampoline bar to enhance the illusion of clouds using Lightroom’s adjustment brush which allows me to adjust the exposure in only certain parts of the image without affecting the entire image. 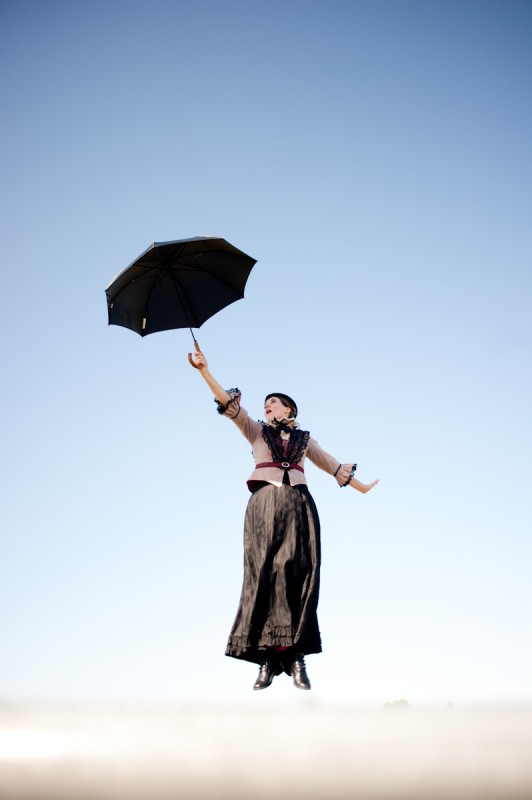 SOOC (straight out of camera) shot 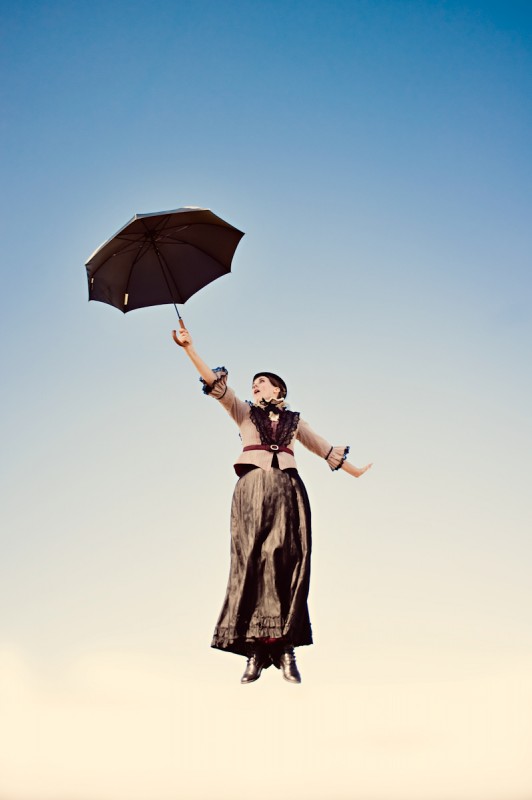 So there you go!  Go and learn from my trampoline flying learning curve and take some fun action shots this summer!

Brooke Snow is a Lifestyle photographer in Cache Valley, Utah. She recently learned how to yodel so she could perform upbeat polka songs in the kitchen for the baby boy she is smitten with.  Her delightful husband sings bass and does a great oom pah line to accompany the yodel chorus.  She wrote an opera once, and dabbles in cowboy poetry.